The Studio Ontology Framework can be used for describing and sharing detailed information about music production in the recording studio. It facilitates capturing the nuances of record production, by providing an explicit, application and situation independent conceptualisation of the studio environment.

The ontology may be used to describe real-world recording scenarios involving physical hardware, or computer based post-production. 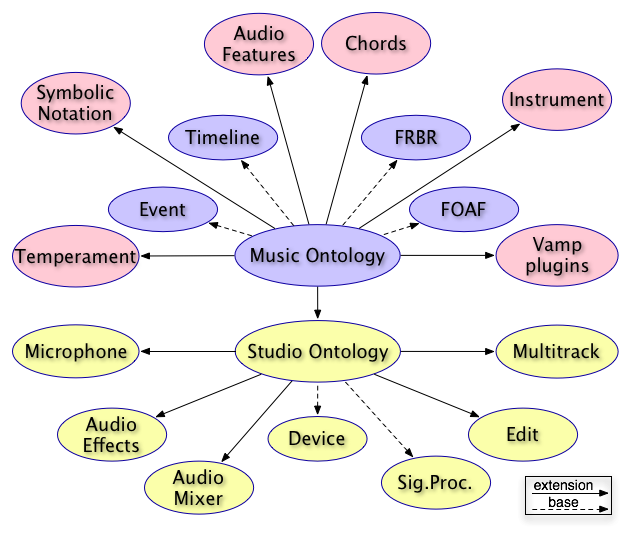 The most important use cases for creating an ontology of studio production are the following:

The Studio Ontology Framework extends the Music Ontology (see fig. 1.), to take advantage of its foundations for dealing with music-related information.

Most notably, it uses the Event and Timeline ontologies, and the music production workflow model of the Music Ontology, to describe the audio engineering workflow. This provides provenance information about recording techniques, mixing, mastering, effects or other transformations.

A fundamental component, the Device Ontology is used to describe technological artifacts, which can be extended to deal with more complex audio engineering tools. For instance, the harmonisation of an audio effects ontology to a model of complex devices (provided by the Device Ontology) is shown in fig. 2. This model parallels the four conceptual layers of the Functional Requirements of Bibliographic Records (FRBR) ontology.

The full specification of this framework will be available here soon. Some modules are already available from the motools repository.